threatened to prevent Delta Air Lines from getting a lucrative tax cut after the company ended its discount program with the National Rifle Association, in the latest fallout from a deadly school shooting in Florida.

Delta is part of a growing chorus of businesses cutting ties with the NRA after the Valentine’s Day shooting at a Florida high school left 17 people dead. But now the airline is coming under attack, with Georgia’s lieutenant governor threatening a sales tax exemption making its way through the legislature.
Republican Lt. Gov. Casey Cagle, president of the state Senate and a leading candidate to succeed Gov. Nathan Deal, tweeted that he would use his position to sink the proposed sales tax exemption on jet fuel.
“I will kill any tax legislation that benefits @Delta unless the company changes its position and fully reinstates its relationship with @NRA,” Cagle tweeted. “Corporations cannot attack conservatives and expect us not to fight back.” 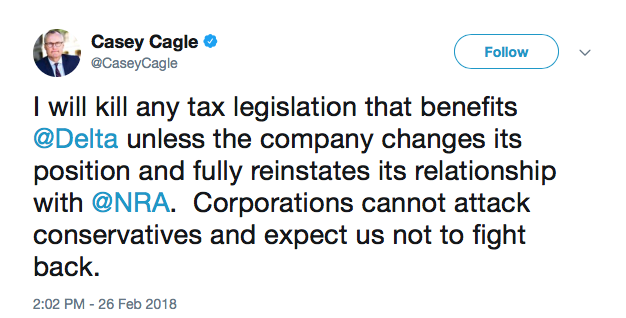 More than a dozen companies, including Metlife, Hertz, Avis, Enterprise, Best Western, Wyndham and United Airlines have ended NRA partnerships since the school shooting. Police say the suspect, 19-year-old Nikolas Cruz, gunned down students with an AR-15 assault-style rifle.
On Saturday, both Delta and United said they will no longer offer discounted fares to NRA members to attend their annual meetings, and both have asked the gun rights group to remove any references to their companies from the NRA website. One of the school shooting survivors also suggested Saturday on Twitter that tourists stay away from the Florida.
Cagle’s comments come as Delta, one of the Georgia’s largest employers, appeared close to convincing lawmakers to restore a $50 million sales tax exemption on jet fuel. Headquartered in Atlanta, Delta would be the prime beneficiary of the tax cut.

The proposed exemption had been part of Deal’s larger tax overhaul, which has passed the House and awaits Senate input.

Cagle was not alone in his push to punish the airline, and the issue appeared poised to become part of the upcoming gubernatorial race.
Sen. Michael Williams, another Republican candidate for governor who had opposed the Delta tax cut before the NRA controversy, praised Cagle’s statement, saying his political rival “is feeling the pressure that we are putting on him.” He applauded Cagle for listening to what he says is the “vast majority” of Republican senators who now want to quash the proposed jet fuel tax cut.
“When Delta came out and pretty much dumped on all the NRA members, it invigorated a lot of our base,” Williams said. “We’re going to fight.”
A spokeswoman for the governor did not immediately respond to a request for comment. Representatives at Delta and the NRA did not respond to requests for comment Monday evening.
On the other side of the aisle, Democratic gubernatorial candidate Stacey Abrams weighed in, saying that this was proof that Republican leaders are in the pocket of the gun lobby.
“Casey Cagle would sacrifice thousands of jobs, endanger our state’s economy, and stick a finger in the eye of a huge employer in our state just to satisfy his buddies at the NRA,” she said.
Another Democrat, Senator Steve Hanson, said Republican leaders had been arguing that the tax cuts were good for business and now were changing their tune.
“Republican fear of the NRA is evidently more important than the Georgia business climate, jobs, or the well-being of Georgia citizens,” Henson said.
In its Saturday statement, Delta said it supports the Second Amendment and its decision “reflects the airline’s neutral status” in the national debate over guns.
The airline also pointed out that last year it withdrew sponsorship from a theater than staged a controversial “Julius Caesar” production that depicted the assassination of a Donald Trump look-alike.
ACLU of Georgia Executive Director Andrea Young criticized Cagle’s move and highlighted Atlanta’s status as a finalist for the location of Amazon’s second U.S. headquarters.
“Politicians should not use taxpayer dollars to impose ideological litmus tests and punish organizations that express views that politicians dislike. Amazon should take note,” Young said in an emailed statement.