Nationwide calls for students to walk out of school to protest gun violence have forced metro Atlanta school districts to grapple with how they will respond to a host of controversial concerns — from free speech to safety.

Some schools issued vague statements or took positions that angered parents and students. There’s also been bit of backpedalling.

Fulton County Schools on Thursday relaxed its initial stance and will allow students to participate in what officials described as a “structured time for the expression of support” at 10 a.m. March 14.

District officials still aren’t calling it a walkout, though that’s same time students at many area schools and universities plan to leave class for 17 minutes in honor of victims killed in last month’s Parkland, Fla., school shooting.
Some parents and students criticized Fulton when it sent a letter last week that stated it does not allow walkouts that disrupt the school day. Instead, the district suggested alternatives — such as a supervised gathering around the flagpole during lunch or a scheduled candlelight vigil.
But after a swift backlash and the realization that a large number of students still planned to leave, the district changed course.
“It’s very clear that students and our families are passionate around this topic and like any good teacher we need to monitor and adjust,” said Superintendent Jeff Rose.
That doesn’t mean Fulton will allow a free-for-all at 10 a.m.
The district will change its middle and high school bell schedules so the timing doesn’t interrupt classes. In many cases, students will not be allowed to leave the building because of safety concerns, and will instead meet up in a gym or elsewhere in the school.
Students who leave campus will be disciplined as they would on any other day.
Mackenzie Oster, a senior at Johns Creek High School, said in order to bring about change people need to listen and come together in one place. That’s what excited her about plans for student demonstrations across the country.
“I really think that this means so much to me because schools are the environments that are being affected by this whole tragedy, and even then we are not really talking about it,” she said.
The Fulton kerfuffle illustrates the delicate balancing act for school districts responding to a youthful, national movement that has brought the gun control debate directly to schoolhouse doors. Officials said they have to weigh students’ free speech rights, how to keep students who walk out safe, how to support students who don’t share the opinions of protesting peers, and how — in the midst of all that — to continue classroom learning.
The ACLU of Georgia started fielding questions about students’ rights soon after the Florida massacre as protest plans took shape. The answers, said legal director Sean Young, boil down to a few constitutional principles.
If students who walk out receive an unexcused absence, schools can’t punish them more harshly than they would for any other unexcused absence. Schools also may only punish speech or expression if it is “materially and substantially” disruptive to school activities or interferes with other students’ rights. Young said it’s not clear that student walkouts would be disruptive in that way.
“We would also encourage all teachers to consider structuring a non-disruptive walkout given the importance of this issue to so many students and parents, but that is not to guarantee that there won’t be a cost to some students,” he said.
Some districts issued statements that were difficult to parse or did not answer specific questions about how they will handle protests.
Gwinnett and Cobb school districts do not support walkouts that interrupt school operations. Both school systems said they would work with students to find other ways to express themselves that do not jeopardize safety or take away class time. A Cobb statement described such actions as a “demonstration of empathy” for Florida victims.
Neither district responded to questions about what exact discipline students could receive for walking out.
“If students cause a disruption then they would face disciplinary action, just as they would should they create a disruption on any other day,” read a Gwinnett statement.
Cobb students who disrupt the school day “may be subject to consequences in accordance with the Student Code of Conduct,” the district wrote.
Cobb County parent Melody McDonald had hoped the district would be more supportive of students who want to walk out instead of issuing a “vague” statement. She said her 16-year-old daughter felt “disheartened” by the district’s response but still plans to walk out of Lassiter High School with classmates.
“I was very disappointed, and I was very saddened by it as a parent who is trying to teach her daughter to use her voting voice,” McDonald said. “I felt like the big machine going against the students is exactly one of the problems we have. To me it was teaching these children the wrong thing.”
In a blog post, Decatur Superintendent David Dude said he supports students’ free speech rights and that schools may hold “optional, age-appropriate” events on March 14.
He also wrote that the student code of conduct prohibits walkouts, which are subject to a “minimum consequence” of three days of in-school suspension. He added that the punishment may be reduced if the student completes an alternative activity, such as writing a letter to an elected representative, and that it’s “not appropriate to pre-determine any consequences that may or may not be faced by students who choose to walk-out or encourage others to do so.”
After sharing his statement on Facebook, several readers complained he had “played” with words and that his message required reading “between the lines.” 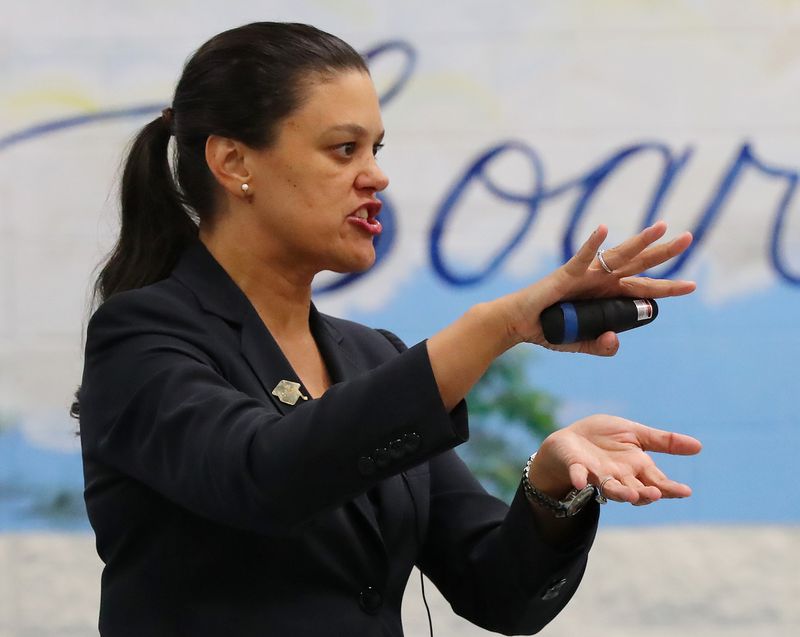 APS Superintendent Meria Carstarphen speaks to parents last month in Atlanta. Curtis Compton/ccompton@ajc.com
Atlanta Public Schools is striving to be as flexible as possible to allow students to participate at the time they want to and in the way they want to, so long as details are coordinated with school officials, said superintendent Meria Carstarphen. That will likely mean walkouts at 10 a.m., even though it may not be the most convenient time during a school day, she said.
“The 10 a.m. time frame for the 17 minutes is crucial to the strategy for some of the students, so if they really want to do it at that time, let them do it,” Carstarphen said. “They just need to say that’s what they want to do.”
She said the advance planning will help the school district set up the security to make sure students are safe.
Marietta and DeKalb school districts also will not punish students who peacefully walk out.
DeKalb County School District is encouraging students who want to demonstrate to do so in the early morning or late afternoon to preserve study and testing schedules, but students will not be disciplined for a “peaceful protest” as long as they remain on campus.
Clayton County Public Schools said school leaders will work with students who want to plan demonstrations, which they said would largely take place between 10 and 10:30 a.m.
National student gun-violence protests
March 14: National School Walkout — At 10 a.m., students will stage walkouts and leave class for 17 minutes, to signify the 17 people killed in the Parkland, Fla. school shooting. The event is spearheaded by the youth-arm of the Women’s March.
March 24: March for Our Lives — Student activists and others will march in Washington, D.C., Atlanta, and in cities across the country. The event was started by Parkland students.
April 20: National High School Walk-Out for Anti Gun Violence — Students are encouraged to walk out of school on the anniversary of the 1999 Columbine High School shooting. After a Connecticut teenager suggested the idea, more than 234,000 people signed an online petition in support.